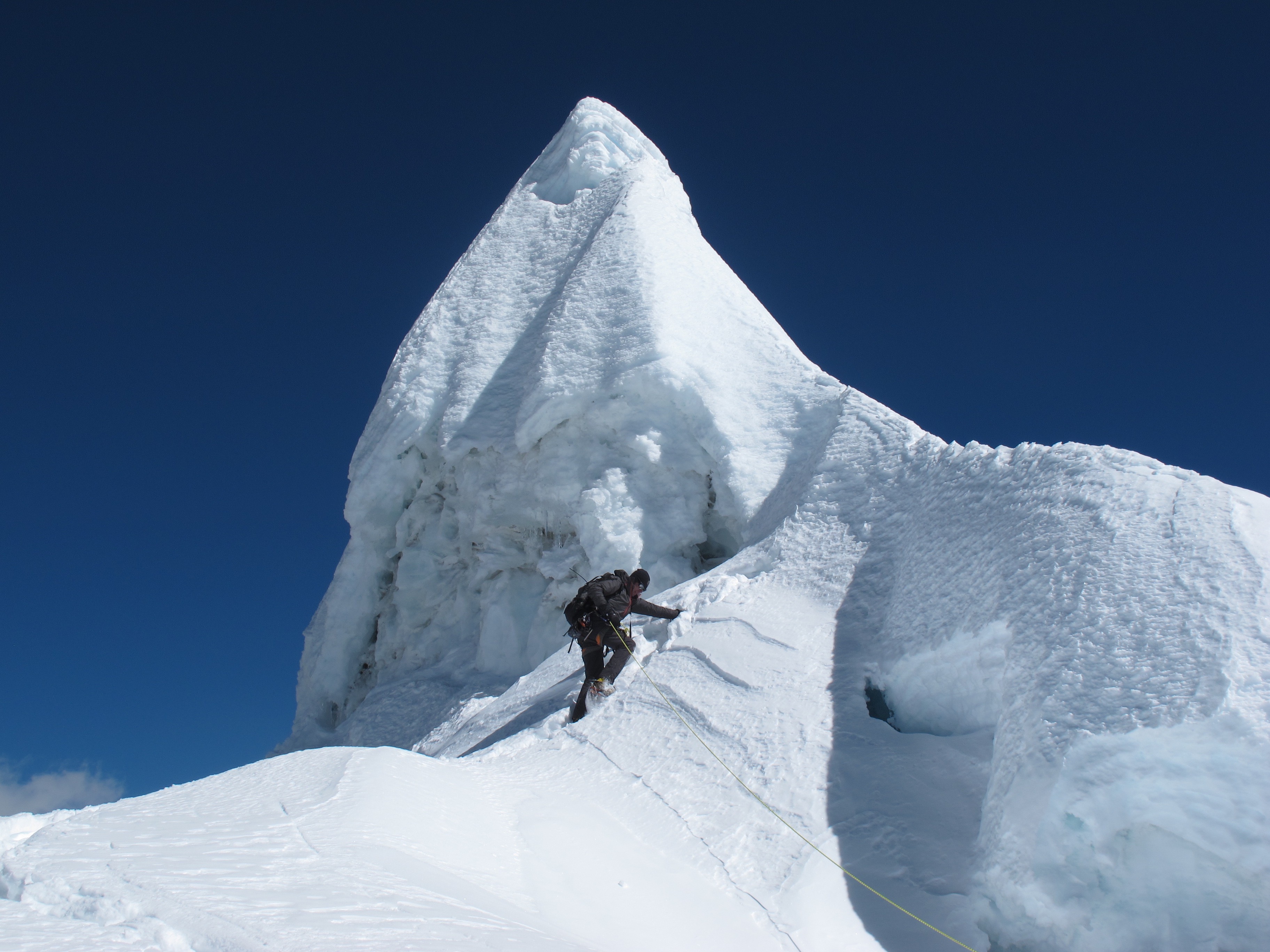 My name's Phil Crampton, that's me above climbing the last pitch of one of my favorite Nepalese peaks Cholatse. I was born and raised in Nottingham, England but moved when I was young to New York City where my love for the mountains and climbing was nurtured. It sounds strange to say that, being in a big urban concrete jungle that I became closer to the mountains but working as a bartender in the city enabled me to take extended leaves from my job, allowing multiple trips to the Cascades and further afield to Nepal, Tibet and Pakistan.

Mountaineering became my passion after my first trip to Nepal in the 90's and now I call Kathmandu home for the majority of the year and where I run the mountaineering expedition company, Altitude Junkies from as well as consult for their sister company, Expedition Himalaya. For a long time I lived and taught at the Tibet Mountaineering Guide School in Lhasa, Tibet. During this time I had the good fortune to train many poor Tibetan boys and girls to become mountain guides, like their Nepal Sherpa cousins, and got to explore and climb in parts of Tibet that have never seen foreigners before. The school is still operational and I am glad to say those students, way back when, are now grown men and women and have their own families and some of them continue to teach at the school to this day. Many of them guide on Everest and Cho Oyu respectively each year.

My mountaineering activities have seen me travel all over the world from Alaska, Canada, Argentina, Japan, India, Tibet, Pakistan, China, Peru and my beloved adopted country of Nepal. I have climbed on many of the worlds' highest peaks including over 45 expeditions to the 8,000-meter peaks including Everest (both Nepal & Tibet), Lhotse, Makalu, Cho Oyu, Dhaulagiri, Manaslu, Gasherbrum I, Broad Peak, Gasherbrum II and Shishapangma. Elsewhere in the Himalaya I have climbed on some of the smaller more technical peaks including Mustagh Ata, Ganesh I, Pumori, Kang Guru, Ama Dablam, and Cholatse.

I enjoy the big peaks but my favorite discipline is lightweight alpinism. I find the Cordillera Blanca of Peru allows me to climb fast and light on 6,000-meter peaks once acclimatized. The climbing is varied and offers all levels of technical difficulty. The other draw of the Cordillera Blanca is the fact that it's reasonably priced in regards to climbing permits, transportation, accommodation and food not to mention the awesome beer. The people of Peru are infectious like the people of Nepal, so it's not uncommon to find myself spending the summer season during the monsoon rains of Nepal down in South America trying new climbing objectives.

Now I don't claim to be a world class alpinist like Ueli Steck or Colin Haley and I also do not claim to be a mountain guide. I believe to call ones self a mountain guide then you should have gone through all the training and passed the stringent qualifications in the disciplines of rock, alpine and ski to call yourself a full UIAGM certified guide. If you are looking to hire a guide look for guides with full UIAGM certification which is the only worldwide recognized certification for mountain guides. The guys and girls with these badges have worked very hard for many years, not to mention the costs involved with gaining the coveted badge. Would you ask a plumber to take a look at your teeth? So why ask someone unqualified person to take you into the mountains. I should imagine some folks do not agree with my opinions on this matter and I don't really care.

Even though I do not consider myself to be a guide, I do belong to the AMGA (American Mountain Guides Association) as I believe it is a great organization and the future for many aspiring guides from the States. I hold the American standard avalanche certification with AIARE Level 1 & 2 and really hope to take my Level 3 certification soon if I can find the time. I believe avalanche education is just as important for mountaineers and alpinists as it is for backcountry skiers. AIARE is another amazing organization and to get educated does not cost a lot of money and it can save your life.

So why start a personal website and blog? I climb mostly 8,000-meter peaks by the normal route and when I do get the chance smaller technical peaks but I don't think I will be awarded the Piolet d'Or anytime in the near future. What I do know is mostly routes and what to expect on some of the more popular peaks of Nepal, Tibet and Pakistan. I get many questions about what mountains folks should climb, what gear do I use, what peaks do I want to climb and what gets me excited after all these years in the hills? Well hopefully this blog may answer some of those questions. It will take me some time to get all the photos and trip descriptions up on the site, but in between packing for expeditions and climbing, I'll post as much information as possible, as soon as possible.